The Normal Menstrual Cycle and the Control of Ovulation

The normal menstrual cycle is described here and how it controls ovulation, reading this will allow you to better understand anomalies when they show up.

Menstruation is the cyclic, orderly sloughing of the uterine lining, in response to the interactions of hormones
produced by the hypothalamus, pituitary, and ovaries. The menstrual cycle may be divided into two phases: (1)
follicular or proliferative phase, and (2) the luteal or secretory phase.The length of a menstrual cycle is the number of
days between the first day of menstrual bleeding of one cycle to the onset of menses of the next cycle. The median
duration of a menstrual cycle is 28 days with most cycle lengths between 25 to 30 days [1-3]. Patients who experience
menstrual cycles that occur at intervals less than 21 days are termed polymenorrheic, while patients who experience
prolonged menstrual cycles greater than 35 days, are termed oligomenorrheic. The typical volume of blood lost during
menstruation is approximately 30 mL [4]. Any amount greater than 80 mL is considered abnormal [4]. The menstrual
cycle is typically most irregular around the extremes of reproductive life (menarche and menopause) due to
anovulation and inadequate follicular development [5-7]. The luteal phase of the cycle is relatively constant in all
women, with a duration of 14 days. The variability of cycle length is usually derived from varying lengths of the
follicular phase of the cycle, which can range from 10 to 16 days.

(1) follicular or proliferative phase, and

(2) the luteal or
secretory phase.
The follicular phase begins from the first day of menses until ovulation. The development of ovarian follicles
characterize this phase.
The LH surge is initiated by a dramatic rise of estradiol produced by the preovulatory follicle and results in
subsequent ovulation. The LH surge stimulates luteinization of the granulosa cells and stimulates the synthesis of
progesterone responsible for the midcycle FSH surge. Also, the LH surge stimulates resumption of meiosis and the
completion of reduction division in the oocyte with the release of the first polar body.
The luteal phase is 14 days long in most women. If the corpus luteum is not rescued by pregnancy, it will demise.
The resultant progesterone withdrawal results in menses.
The average duration of menstrual flow is between four to six days, but the normal range in women can be from as
little as two days up to eight days. The average amount of menstrual blood is 30ml, and over 60 ml is considered
abnormal 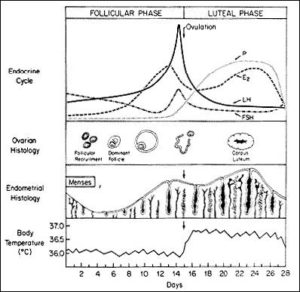 The follicular phase begins from the first day of menses until ovulation. Lower temperatures on a basal body
temperature chart, and more importantly, the development of ovarian follicles, characterize this phase.
Folliculogenesis begins during the last few days of the preceding menstrual cycle until the release of the mature
follicle at ovulation.
Declining steroid production by the corpus luteum and the dramatic fall of inhibin A allows for follicle stimulating
hormone (FSH) to rise during the last few days of the menstrual cycle (Fig. 2) [8]. Another influential factor on the
FSH level in the late luteal phase is related to an increase in GnRH pulsatile secretion secondary to a decline in both
estradiol and progesterone levels [9]. This elevation in FSH allows for the recruitment of a cohort of ovarian follicles
in each ovary, one of which is destined to ovulate during the next menstrual cycle. Once menses ensues, FSH levels
begin to decline due to the negative feedback of estrogen and the negative effects of inhibin B produced by the
developing follicle (Fig. 2) [8, 10-12]. FSH activates the aromatase enzyme in granulosa cells, which converts
androgens to estrogen. A decline in FSH levels leads to the production of a more androgenic microenvironment within
adjacent follicles to the growing dominant follicle. Also, the granulosa cells of the growing follicle secrete a variety of
peptides that may play an autocrine/paracrine role in the inhibition of development of the adjacent follicles. 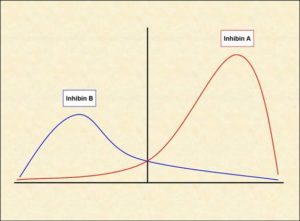 Figure 2 Inhibin level changes throughout the menstrual cycle. Inhibin B dominates the follicular phase of the cycle, while Inhibin A dominates the luteal phase.

Development of the dominant follicle has been described in three stages: (1) Recruitment, (2) Selection, and (3)
Dominance (Fig.3). The recruitment stage takes place during days 1 through 4 of the menstrual cycle. During this
stage, FSH leads to recruitment of a cohort of follicles from the pool of non-proliferating follicles. Between cycle days
5 and 7, selection of a follicle takes place whereby only one follicle is selected from the cohort of recruited follicles to
ovulate, and the remaining follicles will undergo atresia. Anti-Müllerian hormone (AMH), a product of granulosa
cells, is believed to play a role in the selection of the dominant follicle [13, 14]. By cycle day 8, one follicle exerts its
dominance by promoting its own growth and suppressing the maturation of the other ovarian follicles thus becoming
the dominant follicle. 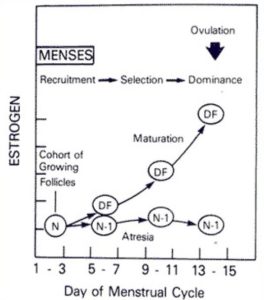 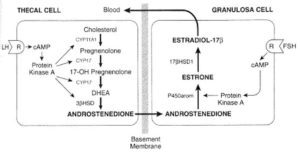 In the ovary, the primordial follicles are surrounded by a single layer of granulosa cells and are arrested in the
diplotene stage of the first meiotic division. After puberty, each primordial follicle enlarges and develops into a
preantral follicle. The preantral follicle is now surrounded by several layers of granulosa cells as well as by theca cells.
The preantral follicle is the first stage of FSH receptivity, as now the follicle has acquired FSH receptors. The preantral
follicle then develops a cavity and is now known as an antral follicle. Finally, it becomes a preovulatory follicle on its
way towards ovulation. Due to the presence of 5α-reductase, preantral and early antral follicles produce more
androstenedione and testosterone in relation to estrogens [20]. 5α-reductase is the enzyme responsible for converting
testosterone to dihydrotestosterone (DHT). Once testosterone has been 5α-reduced, DHT cannot be aromatized.
However, the dominant follicle is able to secrete large quantities of estrogen, primarily estradiol, due to high levels of
CYP19 (aromatase). This shift from an androgenic to an estrogenic follicular microenvironment may play an
important role in selection of the dominant follicle from those follicles that will become atretic.
As mentioned earlier, development of the follicle to the preantral stage is gonadotropin independent, and any follicular
growth beyond this point will require gonadotropin interaction. Gonadotropin secretion is regulated by gonadotropin
releasing hormone (GnRH), steroid hormones, and various peptides released by the dominant follicle. Also, as
mentioned earlier, FSH is elevated during the early follicular phase and then begins to decline until ovulation. In
contrast, LH is low during the early follicular phase and begins to rise by the mid-follicular phase due to the positive
feedback from the rising estrogen levels. For the positive feedback effect of LH release to occur, estradiol levels must
be greater than 200 pg/mL for approximately 50 hours in duration [21]. Gonadotropins are normally secreted in a
pulsatile fashion from the anterior pituitary, and the frequency and amplitude of the pulses vary according to the phase
of the menstrual cycle (Table 2). During the early follicular phase, LH secretion occurs at a pulse frequency of 60 to 90
minutes with relatively constant pulse amplitude. During the late follicular phase prior to ovulation, the pulse
frequency increases and the amplitude may begin to increase. In most women, the LH pulse amplitude begins to
increase after ovulation takes place [22].